‘Lotus‘ is once again available for charter, having returned from a 14,000 mile, two year Atlantic circuit. The trip took her as far south as Venezuelan waters, Trinidad and North up the Eastern Seaboard of America to Nova Scotia in Canada.

This fantastic yacht is an aluminium Ovni 43. Manufactured by Alubat of France, she really is a world girdling, go anywhere vessel. ‘Lotus‘ is the same model as ‘Aventura III‘ used by the celebrated sailor Jimmy Cornell to complete tens of thousands of miles during his great ocean travels circumnavigating the globe. During her recent trip she admirably looked after her short handed crew through some testing conditions which included 6 metre waves and sustained force 9 winds. We can not speak highly enough about this safe, incredibly seaworthy boat.

At 43ft. she weighs in at only 8.5 tonnes (3.6 tonnes of internal lead ballast). She has a hydraulically operated rudder and centre board, which when raised, gives her a draught of only 0.8m: This allows access to many more remote, secluded and usually inaccessible anchorages. Turn up late to one of the more popular haunts and you’re usually assured of finding a spot, as she can occupy areas too shallow for the vast majority of yachts. In fact, if the seabed is suitable she can even be allowed to dry out.

If you‘ve experienced most that the European production boats have to offer, and would like to try something new, then a charter aboard this fantastic yacht could be for you. If you’ve ever dreamt of sailing off into the blue, then spend a week or two aboard this yacht, experiencing first hand, the equipment and systems found on long distance, live aboard yachts. You never know, it could be the start of your adventure of a lifetime; we could thoroughly recommend it and would be delighted to share our experience.

‘Lotus‘ is cutter rigged, with a fully battened main, furling Genoa, and carries a spinnaker and stay sail as part of her sail wardrobe. She is equipped with a colour plotter, radar, DSC vhf and a host of other electronics as part of a comprehensive inventory.

Click on the red dots for images of the yacht 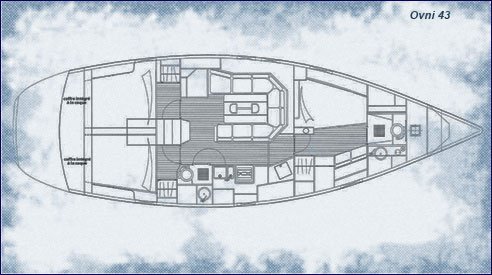 More Info Back to top

The rugged beauty of Scotland is of World renown. A yacht charter in Scotland is one of the best ways of exploring the country. The West Coast is sparsely inhabited and many places are only accessible by sea. For this reason, a bareboat yacht charter is an increasingly popular way of visiting the area. The scenery is spectacular and the wildlife unusual and diverse. There are lots of harbours and anchorages. We would challenge anyone who charters Scotland not to be impressed.

One of the great things about Scottish charters is the unrivalled opportunity for peace and solitude. As anyone who has experienced the delights of a Yacht charter West Coast Scotland will testify, there are none of the crowds that are the norm in other popular areas of yacht charter UK. A cruise with Scottish Yacht Charter allows you the freedom to enjoy deserted anchorages should you wish to. The numerous islands to be found in this area mean that there is usually somewhere offering shelter whatever the direction of the wind. However one of the great things about Scottish charters is that, if you wish, there are plenty of charming coastal towns and villages offering opportunities for reprovisioning, visiting local attractions or just a welcoming pub.

We are ideally placed to offer the perfect location for your yacht charter west coast. Our small fleet of yachts is perfect for Scottish charters, being relatively new and fully equipped. Colour plotters, electric anchor windlasses and single line reefing will all enhance the experience of your Scottish Yacht Charter. As anyone familiar with this area will testify, the diesel heating found on all our boats can be very useful on occasions. For your visit ashore, our yachts are equipped with inflatable tenders and outboard motors at no extra charge. All of these features will help to make your sailing charter Scotland a memorable one.

A widely held misconception is that it always rains in Scotland. Aficionados of cruising the West Coast of Scotland will testify to the long periods of settled weather it is often possible to encounter. Of all the yacht charter UK areas Scottish charters are the ones blessed with the longest daylight hours. In midsummer a lucky sailor who charters Scotland will find that even at midnight it is often not entirely dark. Certainly the weather will usually allow barefoot yacht charters, if that is your fancy. As a result of the effects of the Gulf Stream, temperatures are a good deal higher than is generally appreciated.

One of the considerations when selecting Scottish charters is the ease of access to our home ports. Craobh Haven and Largs marinas are easily accessible by road, train or even air. Our summer base at Craobh Haven is about 2 hours drive from Glasgow or Edinburgh and is approximately 20 miles from Oban, which is the nearest rail link. Largs Marina, our winter base is about 20 miles from Glasgow which in addition to road and rail links has its own airport. Your yachting charters Scotland will start and end with the minimum inconvenience as a result of the locations we have chosen. Anyone who is a client of ours and who charters Scotland regularly will appreciate the ease of access our sites offer for your sailing charter Scotland.

We hope that we have tempted you to sample the delights of yacht charters Scotland. Our aim is to ensure that anyone experiencing charters Scotland does so in an enjoyable and hassle free manner. Whether your holiday aim is to discover quiet unspoiled anchorage's, or to undertake longer more challenging cruises, we hope that your experience will make you agree with us that a Charters Scotland cruise is not one to be missed.